It’s been just over a year since I moved here. Husky-mix rescue dog Lily did not like ocean waves at all then. Now she does not mind them much. I had a border collie years ago who attacked waves with abandon. She attacked all water, actually… fountains, garden hose sprays, sprinklers, but she went at waves with relish.

Now she allows them to come over her feet as she walks, as long as it’s not a rogue wave or one that makes her think she’s going out with the tide. But this day was calm, we were on the south point of this little island where the island curve goes into Mason Inlet to Banks Channel. Not much wave action here at all, especially not at low tide.

But as we arrived we were treated to this– 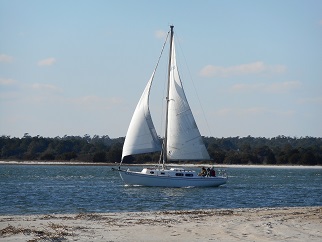 Not up on my sailboats… maybe a sloop? Anyway something that needed a crew. They all looked very busy, and happy about their venture.

but she never goes too far. What, like she’d make her home on the beach with the sand crabs and skimmers? Maybe a fisherman would toss her a fish head? Likely she’d be more inclined to roll in it than eat it. No, she did not go very far before, taking leash in mouth, she came right back 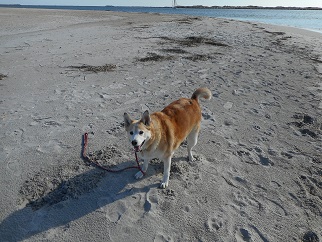 Besides, even though the rules say dogs have to be on leashes it is also understood I suppose that a human has to be at the other end.

Still, I suppose a little exploring never hurts. Besides, those police suvs are pretty audible even in sand.