So (a really long time ago) I used to be a librarian at a library branch in a very bad part of town in Jacksonville, Florida. I loved being a librarian, did not love being written up for warning children against playing swordfights with small chairs while jumping on library tables because their parents did not like the way I warned them. Like, what part of “Please do not hit each other with those chairs” is inappropriate??

Nor did I particularly care for greeting one of my favorite (calmer) patrons, noticing a cast on his arm and when I asked him what happened being told “I got shot.”

No, this was not a choice part of town and I only lasted there a couple of years.

Anyway, one of my coworkers who had worked there forever and whom I really admired for her unflappable attitude had this sign over her desk–

“I have gone out to look for myself. If I come back before I return please hold me until I get here.”

I found this gratifying and still find it so, having many days where I still feel this way.

But being lost in being on my own is not a problem. So why do married people feel as though single people need to not be alone? Having experienced a not-so-good marriage does not nullify the fact for me that I do know there are wonderful marriages, more or less relationships in which the two people complement each other, trust, nurture and support each other, can laugh at themselves and each other without offending anybody, where they have each other’s back, and all the other elements that apply to a happy marriage or coupledom.

I have no doubt that these exist. I have observed them. Then why, when I am more than 30 years into being single and clearly happy with my life is it important to change things up? If it isn’t broken, as they say. Yet often well-meaning (married) people will insist I meet someone that they know, someone I just have to meet.

So while I appreciate others’ interest in my well-being I have a kind of a pact with God. If He wants me to have a new dimension to my life in the way of a male counterpart He will make it brilliantly clear to me. Otherwise no thanks. My own efforts years ago fell far short. He knows me. He knows sometimes I have to be hit over the head to be made to see.

Though I’d not want to be like the proverbial drowning man who rebuffed  a person on a crane, then in a rowboat, then a helicopter and finally drowned. Finding himself in Heaven he asks God, “I trusted You to help me, what happened?” God replies, “Well, I sent a crane, a rowboat and a helicopter…. “

Some days there should be those orange warning cones around me. Seriously. There are days when whatever I say, whatever I do sends people seeking cover. Times like this tell me I need to come apart before I fall apart.

So I go to the Cove in the mountains near Asheville, NC.

This trip as most I hiked to the summit overlook. I saw lovely wildflowers–

and a couple of warnings:

and I stopped many times because I was going up a mountain. Finally I saw

so I knew I would soon get to see 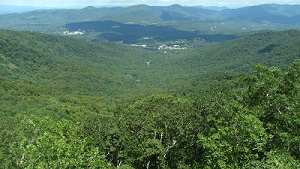 Sitting there I found all the things that had me all tied up in knots seemed so insignificant, somehow.

Coming down you are using a whole different set of muscles. These are the ones that, when you reach the bottom and rest a while tighten up to the point where you look like you are in a 3-legged race only both of your legs are in the burlap sack.

This is harder than it looks.

This was the inn where I stayed

, and this is the main building where conferences are held, and the dining room, and this lovely stone deck–

I recommend it. I try to go there a couple of times a year. Incredible food, lovely people, a beautiful place in the mountains.

And a stone chapel

So when my son was growing up and after I left my father’s employ at his newspaper (temporarily it turned out, but for me it was permanent at the time), I went through many other occupations. Legal assistant (fired because one attorney’s secretary took such a dislike to me she blamed my eyebrows whatever that meant, I have none), veterinary receptionist (horrible hours, and pretty cutthroat– those other receptionists incredibly unhelpful not to mention the sadness with some pets and their families), substitute teacher. This was an invitation for punishment. Some teacher, too weekend-hungover to go to work threw subs at the mercy of their vitriolic, vindictive students. There were not a few schools where I had no qualms telling them not to bother calling. I got consistent calls from a school with developmentally challenged students– autistic, severe and profound, various levels of educability/trainability. I rather enjoyed this. I was an assistant, but was only too glad to support teachers dedicated to their work, who threw their entire beings into their classes. It was however sporadic work and paid $45 a day. I lasted about a year at this, then went with temp agencies, lots of them. I figured I could work out my own hours. Oh sure, I knew they charged the employer upwards of $20-$30 per hour (this is in the 80s and 90s) while I got a small fraction, but I could decide what and when I wanted to work, I thought.

Eventually this too soured. I decided I’d be good at waitressing. I enjoyed seeing people having a good time, eating, being with friends. I had a lot of energy (then) and loved chatting people up. I applied to a small place downtown and learned they were looking for a hostess, it was a nightclub. Ok, I figured I was probably too old (mid-30s at this point), but I kept my name in. A few days later they called to offer me the job. I’d thought better of this job. It was in a not-so-great part of town, late hours, who’d stay with my son, so on. I declined.

A neighbor told me she had a friend who was a server at a dining club downtown. Renowned for great food and very popular for wedding rehearsals and receptions I thought I’d give this one a try. I filled out my application and was called back a few days later to interview. Had I ever worked in  restaurants before? No. Could I lift up to 35 pounds? Sure I could. Was I flexible with my hours? Yes. Ok, I was told to wait to speak to the manager of the dining room. A few moments later a young man appeared. A pleasant sort, looked a bit tired but he politely pointed me to a chair opposite his desk. He studied me a moment then asked me to tell him about myself, my previous work. I began a sort of diatribe I now realize. I can’t remember what I said or how long I talked. He rested his head on his hand, elbow propped up on his desk while I suppose I waxed rhapsodic about work and life in general. I thought at the time he was enthralled with my woven tapestry of life. Looking back I know he was probably just grateful to be out of his hectic kitchen.

I did not hear from them again.

So a new chain of restaurants was opening in the area: Olive Garden. Now popular, at the time it sounded fun and who doesn’t like Italian? So I went by one afternoon, filled out an application. They thanked me, explained I would hear “One way or the other” in a few days. Ever the optimist, I took out some of my meager savings to buy soft-soled shoes. I wanted them to be durable and sturdy but not something I’d fall over. The young man helping me was very patient. What did he think, high or low tops? I’d be on my feet a long time. Blank stare. Did he like this job? Maybe I wouldn’t be a shoe salesperson if the waitressing didn’t work out. I finally decided on low tops, black because I was told the uniform was black slacks, white shirt. I was called 2 days after. I spoke to two guys who looked to be about my age, very enthusiastic about their new venture, wanted a lot of enthusiasm and energy from their wait staff, they said. Oh, I understood, could completely be very energetic, enthusiastic! A lot of smiling, Nodding of assent, understanding. Then they excused themselves, saying they’d be right back. As they left I overheard one say, “Have we ever hired anyone that old before?” I did not stay for the rest of the interview.

From there I ran into some luck because I also volunteered at the library. One of the employees excitedly told me some positions were opening, I really needed to apply. I did. The rest is history, which resulted in the longest career in any one occupation in my working life.

And they required you be able to lift up to 40 pounds. (The black low-tops turned out to be great library shoes.)