They say the Wright brothers chose seagulls to use as a model for their efforts at flying because they are so aerodynamically perfect. They are curious birds. They eat virtually anything, they bicker and compete for any fish head or remains they find. But they are beautiful to watch in flight.

It’s rare that you find an injured seagull they are so adept at evasion and finessing danger. So when rescue dogs Lily and Lulu and I were walking the beach one day last week I was sad when I saw what looked to be a dead seagull washed up at the high tide mark. Always curious, the dogs strained to inspect it and as they came closer it raised its head. Not dead at all but lying on its side in a very non-seagull posture. I held the dogs back so they wouldn’t scare it (or get bit which nosey Lily did get bit because she is so nosey) and saw a horrible fishing lure, one of those 3 inch long fish looking ones with the lethal 3-barbed hooks at either end. And somehow this seagull had got it stuck in itself at both barbed ends.

The dogs seemed to understand they needed to give this bird some space so I gingerly picked it up amazed at how light it was. It appeared to understand I meant it no harm because it didn’t try to bite me or struggle, not that it could, hog-tied by this terrible thing.

As I examined it I saw there was no way I could dislodge these hooks. On one side a barb went clean through the front edge of his wing and the other side the hook had gone in behind a leg where it had bled a little. But this bird, despite being dragged around by the tide and waves and deposited here was still very much alive.

I remembered passing a surf fisherman as we walked out so I turned back to see if he had some pliers. He was not there, but a truck was driving up the beach and I knew this would be either a fisherman or a police officer patrolling the beach. It was the police and I explained the injuries of this gull needed pliers and I couldn’t get this off him myself.

A side note here- all birds on this planet are federally protected. It is illegal to touch even a discarded feather. So having once volunteered at a raptor center for injured eagles, hawks, owls and other birds I knew I should not have even touched this bird but could not have left him there. So the officer radioed for a park ranger and waited with me.

When the ranger arrived the officer had a few words with him, maybe to assure him that unkempt and wild as I might have looked that early I seemed harmless, or that it was a felony to do this but go ahead and help this bird anyway, who knows. The officer drove off and the ranger came and looked at the gull. He shook his head and blew a low whistle then went to his truck for a pliers. He cut away the short loop of fishing line that had not become entangled and I gently held the bird’s head so it would not bite him as he worked the pliers, first to get the barb out of the wing, then from behind its leg. We commiserated as to how painful this all must be and after the bird was free the ranger instructed me to take it down by the water. The tide had just turned going out so the bird could rest until he overcame his shock and pain to fly away. I do not live on the beach but in town and the ranger assured me he would come back and check on him.

As Lily, Lulu and I walked back to the car we looked back once or twice to see him. He was still calmly sitting where I’d placed him waiting for the wild spirit to return. 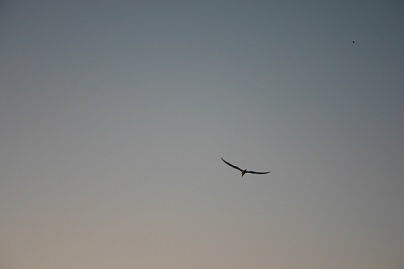