No, this isn’t about bling glitz, or celebrity or awards. The shimmer of a raindrop on a petal kind of glitz. The reflection of a mountain in a dew drop. Maybe with all the imposed shut-in days I have noticed more. I gave up waiting for normal to come back and made my own normal. 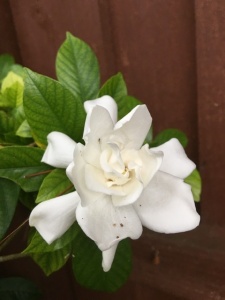 I have bracelets, rings, jewelry I never wear. Some I bought for myself, some others gave me. It’s pretty. I just don’t wear it. Somehow it pales in its beauty when it’s worn. I see others loaded down with bracelets, necklaces, earrings. I tend to still see the person, just a heavier version with all that hardware. I guess there’s a difference between tasteful and too much.

So this bee is an ornament. The flower is embellished. It’s also pollinated and will proliferate this maypop vine. These vines have taken over the back fence already but can be managed. They attract specific butterflies the same way monarchs are attracted to Asclepius tuberosa  (butterfly weed), more different butterflies attracted by it in Florida but here we get Gulf frittilaries. They’ve been all over these vines but today we’ve had a lot of rain. Still don’t know where butterflies go when it rains but it doesn’t affect the bees. 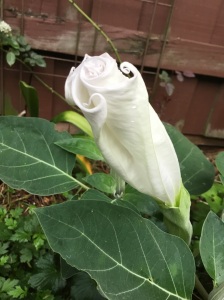 Angel trumpet in a happy place will take it over. Every part of the plant is toxic and since I have dogs I don’t generally have poisonous plants. I tore out all the oleander. But rescue dogs Lily and Lulu pretty much ignore this plant and all the plants.

I don’t understand electrical stuff. If I flip a wall light switch I expect the light to go on. I have ceiling lights in two hallways controlled by three different switches in different places. One switch, when I turned the light on it flickered, then went out. Would not go on, not on its own, but if I used one of the other switches it worked. So I figured the switch was bad. I installed a new switch. None worked. So I called a handyman. He could not get them to work independently as they had before, he replaced two switches. But they work if one specific switch is on. He said it always had been like that, I just never noticed. Maybe I should call an actual electrician, or just accept this as another house quirk.

And now there are six storm systems in the Atlantic. Well, one is crossing south Florida to the gulf, heading (they think) for Louisiana. They do not need another storm. It does give a focus other than this stupid virus. Funny how life doesn’t stop. So I had almost gotten through my stockpile of water from last hurricane season. If any of these get any closer I have to stock up again. 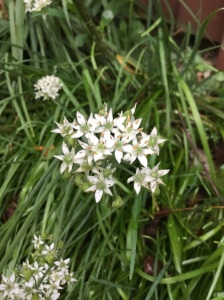 One thing about flowers. They are what they are.